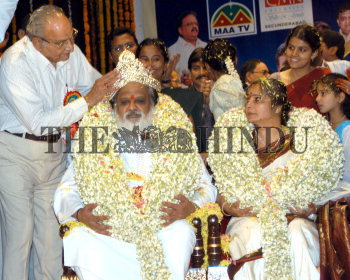 Caption : Veteran film director K. VISHWANATH placing a silver crown to playback singer S.P. Balasubramaniam, who is being honourd by "The Music Group" during the 20th Anniversary celebrations of the group in Hyderabad on March 24, 2005. Photo: K. Gajendran.