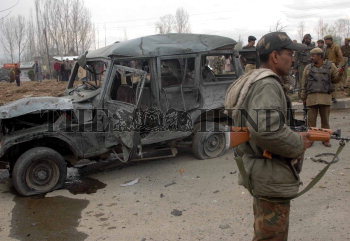 Caption : Army personnel take a look around the army vehicle which was damaged in an IED blast at Hyderpora in Srinagar on March 23, 2005. One civilian was killed, four civilians and four armymen were injured in the blast. Photo: Nissar Ahmad