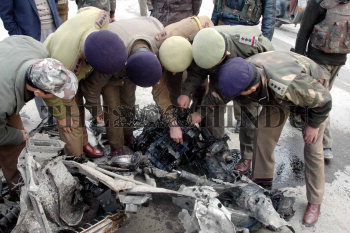 Caption : Senior Police officers inspecting the debris of the vehicle, which was damaged in an IED blast, at Hyderpora in Srinagar on Mrach 23. 2005, killing one civilian and injuring four others,. Four Army soldiers were also injured in the blast. Photo: Nissar Ahmad