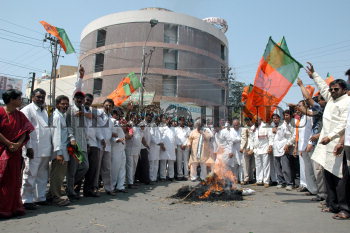 Caption : Former Union Minister Bandaru Dattatreya leading the BJP demonstration against US President George Bush, by burning his effigy at Kachiguda in Hyderabad on March 21, 2005, protesting against the denial of visa by the US government to Gujarat Chief Minister Narendra Modi. Photo: K. Ramesh Babu