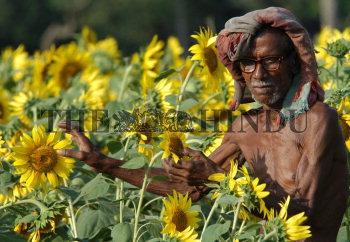 Caption : An aged farmer checks the quality of the sunflower seeds in his farm at Falta, in South 24 Paraganas district, 60 KM away from Kolkata on March 21, 2005. Since the late 1980s, India has focussed its efforts on increasing oilseed production to meet its growing demand for vegoils. India, as the world's second largest consumer of vegoils, has seen per capita consumption increase from about 4 kg per annum to 10 kg per annum in the past four decades. The increase in vegoil consumption is partially due to a reduction in import barriers which helped to lower domestic prices and improve the availability of vegoils. India's vegoil consumption for 2004-2005 is forecast at a record 11.8 Mt, up from the previous record of 11.5 Mt in 2003-2004. India is the world's second largest producer of vegoils, but that production only meets about half of its annual requirements. The fourth quarter of 2004 saw a 9.3% increase in world production of oils to 34.80 Mn T compared to 31.85 Mn T in the previous quarter. This was mainly brought about by increases in the production of soybean oil, rapeseed oil and sunflower oil. Production of soybean oil increased to 8.3 Mn T or by 11.1% while rapeseed oil increased to 4.01 Mn T or by 7.2% and that of sunflower oil to 7.96 Mn T or by 43.2%. The increase in sunflower oil production, as reported, was due to the increased productivity in EU countries. Photo: Parth Sanyal