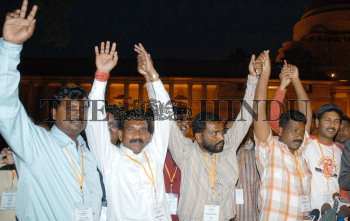 Caption : Fve independent MLAs of Jharkhand outside the Rashtrapati Bhawan after 41 MLAs were paraded before the President A.P.J. Abdul Kalam in support of NDA Government in Jharkhand, in New Delhi on March 03, 2005. Photo: V. Sudershan