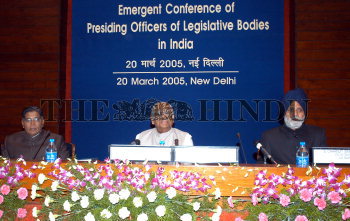 Caption : The Emergent Conference of Presiding Officers of Legislative Bodies in India is being held at the Parliament Annexe in New Delhi on March 20, 2005. Seen from the left are the Deputy Chairman of the Rajya Sabha K. Rahman Khan, the Lok Sabha Speaker and Chairman of the Conference Somnath Chatterjee and the Deputy Speaker of the Lok Sabha Charanjit Singh Atwal. Photo: Shanker Chakravarty