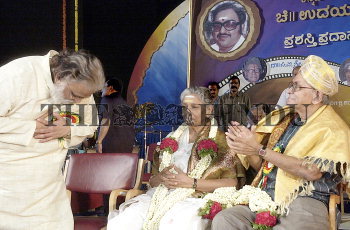 Caption : Noted playback singer S.P. Balasubramaniam (ext left) greeting the veteran singers, S. Janaki and P.B. SRINIVOS, at a function in Bangalore where all the three were presented with Chi. Udayashankar Memorial Award on March 19, 2005. The award, which is named after the popular lyricist Chi. Udyashankar, was instituted in 2001 by a forum of Kannada cinema. Photo: K. Bhagya Prakash