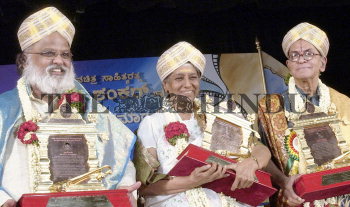 Caption : Noted playback singers (from right), P.B. Srinivos, S. Janaki and S.P. Balasubramaniam, who were presented with Chi. Udayashankar Memorial Award for 2002, 2003 and 2004 respectively seen after receiving the awards at a function in Bangalore on March 19, 2005. The award, which is named after the popular lyricist Chi. Udyashankar, was instituted in 2001 by a forum of Kannada cinema. Photo: K. Bhagya Prakash