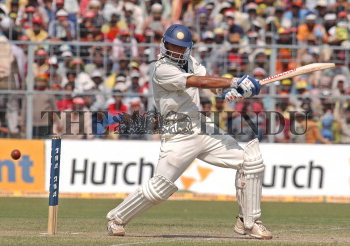 Caption : Indian batsman Rahul Dravid in action during his century knock in the second innings of the second cricket Test match between India and Pakistan at the Eden Gardens in Kolkata on March 19, 2005. He scored centuries in both the innings. Photo: S. Subramanium