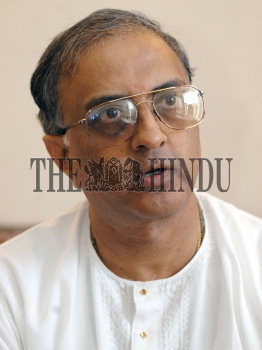 Caption : The Bangalore-based chartered accountant Arun Chintopanth, Grand Master, Grand Lodge of India, who heads the Freemasonry movement in India, talking to the media in Tiruchi on March 19, 2005. Freemasonry, one of the world’s oldest caring societies with membership of about 15 million people across 150 countries, has been silently rendering yeoman service to the society for more than three centuries through its LODGES (branches) located across nations. The first Freemasonry Lodge in India was formed in Calcutta in 1728 and Tiruchi got the distinction of being the place where the second Lodge in the country was established in 1735. Photo: M. Moorthy