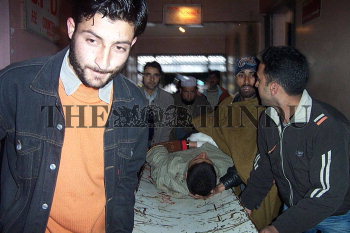 Caption : A school boy being carried by relatives for treatment at a local hospital in Srinagar on March 18, 2005, following a bomb explosion in a school near an army camp at Bandipora in North Kashmir in which two school BOYS were killed and five others wounded. Photo: Nissar Ahmad