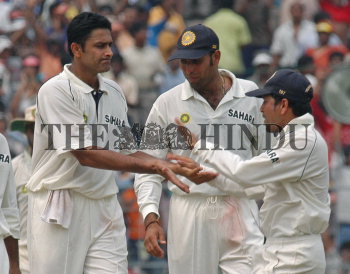 Caption : India's Anil Kumble does high five with Sachin Tendulkar after getting Abdul Razzaq's wicket as VVS Laxman looks on during the third day of the second cricket Test match between India and Pakistan at the Eden Garden Stadium in Kolkata on March 18, 2005. Photo: S. Subramanium