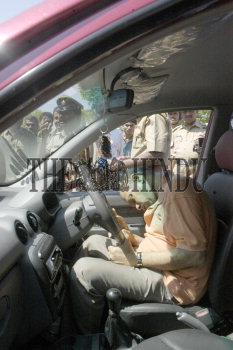 MAN FOUND DEAD ON THE DRIVERS SEAT NEAR HIGHCOURT

Caption : A man was found dead on the driver's seat of a car near High Court in Bangalore on the morning of March 18, 2005. Police are investigating the cause of death. Photo: K. Gopinathan