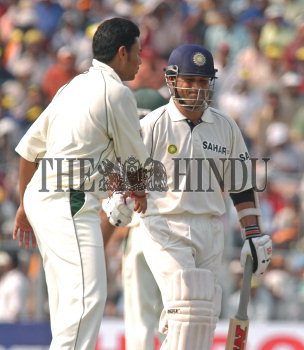 Caption : Indian batsman Sachin Tendulkar being congratulated by bolwer Danish Kaneria after reaching his 10,000 runs during the first day of the second cricket Test match between India and Pakistan at the Eden Garden Stadium in Kolkata on March 16, 2005. Tendulkar becomes the fifth batsman to complete 10,000 Test runs. Photo: S. Subramanium