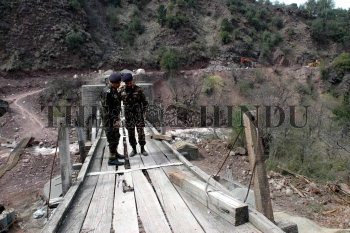 Caption : An Indian Army officer walks on a bridge connecting Muzaffarabad near Kaman Post, 118 km north of Srinagar, on March 16, 2005. Prime Minister Manmohan Singh will flag off on April 7, 2005, the first bus to travel from Indian Kashmir end to the Pakistani sector of the Himalayan region to boost the peace efforts, a spokesman said on March 13, 2005. Photo: Nissar Ahmad