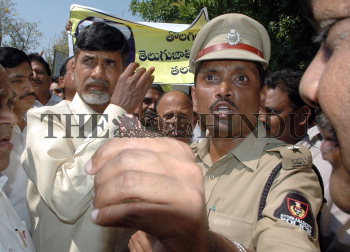 Caption : The Telugu Desam president N. Chandrababu Naidu being led in to arrest by the DCP (Central zone) B. Srinivasulu, at NTR Ghat in Hyderabad on March 16, 2005, over the naming of the Shamshabad International Airport, after the late Rajiv Gandhi. Photo: P. V. Sivakumar