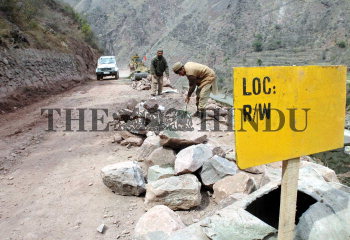 Caption : Labourers busy with repairing the road at a ceasefire line between India and Pakistan at Kaman post, some 120 kms north of Srinagar, the summer capital of Indian-held Kashmir, on March 16, 2005. Hundreds of Indian Army engineers and workers are clearing land mines and repairing a dilapidated highway to meet the April 7, 2005 deadline for starting a historic bus service, linking the Indian- and Pakistani-controlled portions of Kashmir, officials said on March 14, 2005. The Srinagar Muzaffarabad highway was once a major trade route bringing in oil, salt and other key supplies and linking tens of thousands of families. Photo: Nissar Ahmad