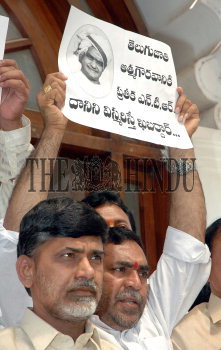 Caption : The Telugu Desam president N. Chandrababu Naidu watches as his partymen protest over the naming of the Shamshabad International Airport after the late Rajiv Gandhi on March 16, 2005. They instead want it to be named after the late N. T. Rama Rao . Photo: P. V. Sivakumar