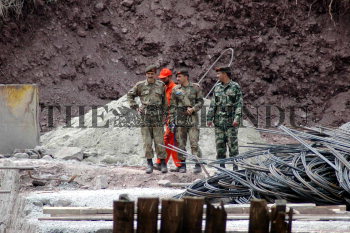 Caption : Pakistan Army soldiers inspecting their side of the bridge connecting Muzaffarabad and Srinagar, India, which is being reconstructed by the engineers of both the countries, at Kaman Post, Uri, near the LoC, about 118 km from Srinagar on March 14, 2005. The Indian and Pakistan Governments have agreed on a bus link between Srinagar and Muzaffarabad. The road between the two cities was in disuse for a long time and the Kaman bridge which is common to both the countries was in a bad shape. The Army, the Border Roads Organisation (BRO) and the civil administration are working in tandem on the road. The engineers of the Indian and the Pakistani Army are striving hard to get the bridge repaired before April 7, the day of the commencement of the bus service. (Photo taken from the Indian side) Photo: Nissar Ahmad