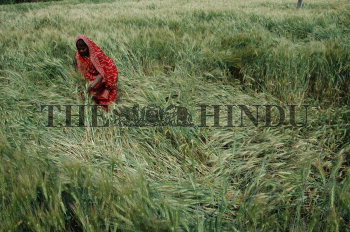 CROPS DAMAGE BY THE HAILSTORM

Caption : A woman farmer watching the crops, damaged by the hailstorm in Khajuri Kalan village near Bhopal on March 10, 2005. Agriculture department officials said, the crops were heavily damaged in Rewa, Sagar, Hoshangabad, Bhopal and Indore divisions in Madhya Pradesh on March 09, 2005 by the hailstorms and rain. Photo: A. M. Faruqui.