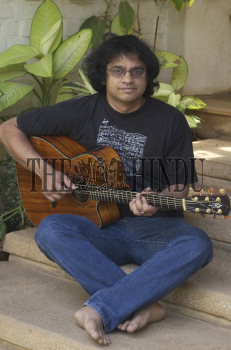 Caption : Multi faceted guitarist and composer Prasanna, during an interaction in Bangalore on February 05, 2005. An IITian, he has played several numbers for A. R. Rahman and Ilaiyaraja including 'July Maatham' (Puthiya Mugam), 'Kannodu Kanbathellam' (Jeans), 'Kasu Melae' (Kathala Kathala). He has successfully explored Carnatic music with his electric guitar and has to his credit a degree in Jazz and Classical composition from Berkeley College of Music where he pocketed the guitar achievement award and the composition achievement award in 2004. Photo: K. Bhagya Prakash