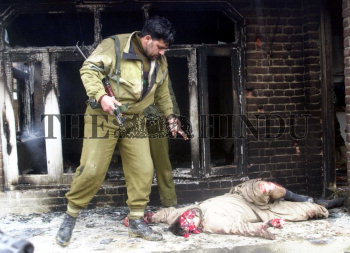 Caption : A police constable is seen standing near the body of the suspected LET Commander Abu-Hamaza, who was killed during an encounter at Tulbag Pampore in Srinagar on March 10, 2005. Police alleged that the LET commander was involved in the killing of the railway engineers. Photo: Nissar Ahmad