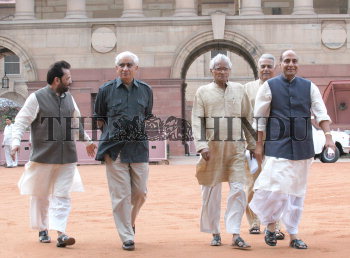 Caption : National Democratic Alliance (NDA) leaders led by the Convener George Fernandes (2nd from left), coming out from the Rashtrapati Bhavan in New Delhi after submitting a memorandum to the President A.P.J. Abdul Kalam (not in pic) onthe JHARKHAND issue, on March 9, 2005, with (from left) Mukhtar Abbas Naqvi, Jaswant Singh, Yashwant Sinha and Rajnath Singh. On March 2, 2005 the JHARKHAND Governor Syed Sibtey Razi (not in pic) invited the JHARKHAND Mukti Morcha leader Shibu Soren (not in pic) to form the Government even as both the National Democratic Alliance and the United Progressive Alliance claimed that they had the adequate number of MLAs. Photo: Shanker Chakravarty