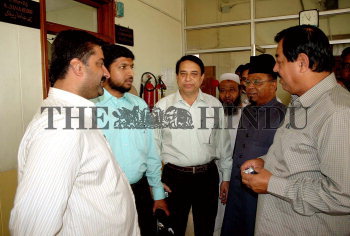 Caption : The MIM legislators interacting with Anees Moinuddin (second from left), after they met Home Minister K.Jana Reddy in the Assembly on March 9, 2005. Anees was a suspect in the bomb blast outside the Saibaba Temple at Dilsukhnagar. He was arrested under POTA and was released on bail. Photo: Mohammed Yousuf