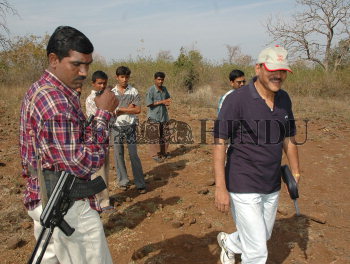 Caption : The IG (Greyhounds) Kode Durga Prasad (right) at Mannala Gutta in the Nizamabad Karimnagar border in Andhra Pradesh on March 07, 2005 after the encounter in which eight CPI Maoists were killed. Photo: P. V. Sivakumar