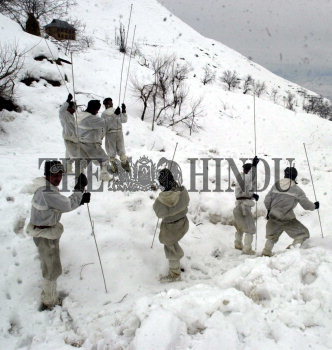 Caption : The Indian army rescuer teams who have been specially called in from Siachen, looking for dead bodies in the snow storm hit Waltengo-Naar village in South Kashmir on March 07, 2005. The storm which claimed more than 300 lives, hit the village on 21st of February. Authorities believe that there is a possibility that many dead bodies are still buried under the snow. Photo: Nissar Ahmad