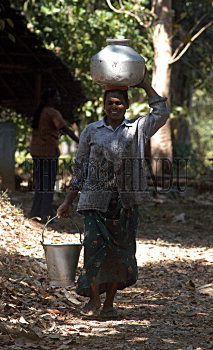 Caption : A women worker engaged in a rubber plantation near Thrissur, Kerala. With men migrating to urban areas in search of paid labour, women don the bread-earner role of the family. An estimated 78 per cent of the country's economically active women are involved in agriculture with 35 percent working as cultivators and 43 percent as labourers. This years budget honours the fairer sex by setting aside a corpus of Rs 14,379 crore for the purpose of women upliftment a tribute to working women on the occasion of International Women's Day which falls on March 8. Photo: K.K. Mustafah 7-3-2005 Digital Photo by K_ K_ Mustafah.7/3/05