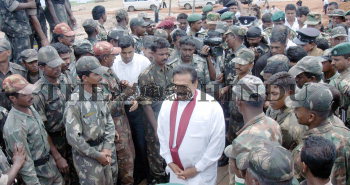 SL PM WITH INDIAN ARMY IN THE EASTERN SRI LANKA

Caption : The Prime Minister Mahinda Rajapaksa talking to the Indian Army soldiers at Arugambay Potuwil in the eastern Sri Lanka on March 05, 2005. Indian Army is building a bridge in Arugambay which was damaged due to the December 26, 2004 tsunami. Photo: Sriyantha Walpola.