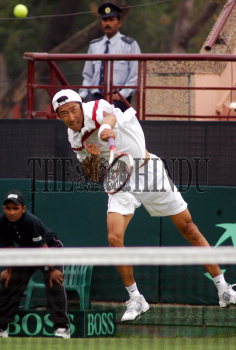 Caption : WANG YU JR. of China in action during the Asia Oceania group I Davis Cup first round singles tennis match against India's Prakash Amritraj at the R.K. Khanna Stadium in New Delhi on March 4, 2005. The match was abandoned due to bad weather. Photo: S. Subramanium