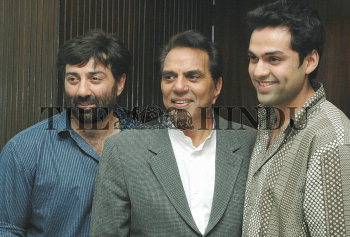 Caption : Actor Abhay Deol (right), who is starring in the film "Socha Na Tha", seen with his uncle and veteran actor, Dharmendra and cousin and producer of the film, Sunny Deol (left), at the premiere of the film in New Delhi on March 3, 2005. Photo: Rajeev Bhatt