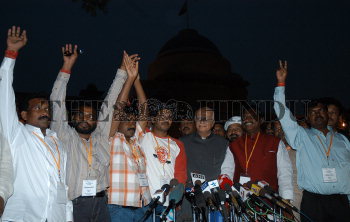 Caption : The Bharatiya Janata Party (BJP) president, L.K. Advani, along with five independent MLAs (hands raised) of Jharkhand talking to the press outside the Rashtrapati Bhavan in New Delhi on March 3, 2005. A delegation from Jharkhand comprising 30 BJP MLAs, 6 JD (U) MLAs and 5 Independent MLAs, led by L.K. Advani met the President, A.P.J. Abdul Kalam (not in picture), demanding the dismissal of the Shibu Soren Government and inducting NDA-led Government in Jharkhand. Photo: V. Sudershan