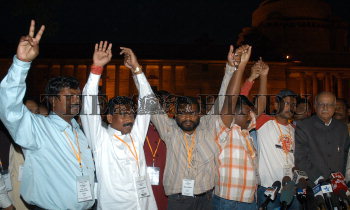 Caption : The Bharatiya Janata Party (BJP) president, L.K. Advani, along with five independent MLAs of JHARKHAND talking to the press outside the Rashtrapati Bhavan in New Delhi on March 3, 2005. A delegation from JHARKHAND comprising 30 BJP MLAs, 6 JD (U) MLAs and 5 Independent MLAs, led by L.K. Advani met the President, A.P.J. Abdul Kalam (not in picture), demanding the dismissal of the Shibu Soren Government and inducting NDA-led Government in JHARKHAND. Photo: V. Sudershan