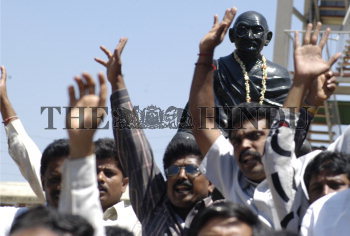 Caption : BJP activists of Karnataka, protesting against the formation of Government by Shibu Soren of Jharkhand Mukti Morcha, at Gandhi statue near Gandhi Nagar in Bangalore on March 3, 2005. Photo: K. Gopinathan