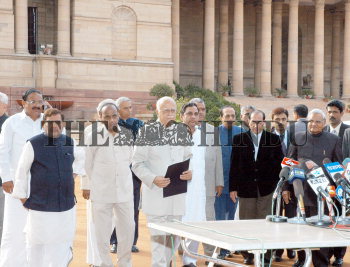 NDA DELEGATION LED BY L.K. ADVANI AT RASHTRAPATI B

Caption : BJP leader and Leader of the Opposition L.K. Advani briefing the media outside Rashtrapati Bhavan along with former Prime Minister A.B.Vajpayee, Samata Party leader George Fernandes and other members of the NDA delegation, after submitting a memorandum to the President on Jharkhand issue, in New Delhi on March 02, 2005. Photo: Shanker Chakravarty