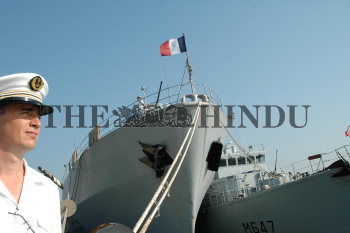 Caption : An officer of the French Navy standing near the French naval ships docked at Kochi port on February 28, 2005. A French Naval Task Group comprising two Mine Hunting ships 'FNS Orion' and 'FNS Aigle' along with one Mine Warfare Command ship 'FNS Loire' are in Kochi for the ongoing nine-day Indo-French naval bilateral exercise, 'Varuna 2005'. Photo: Vipin Chandran.