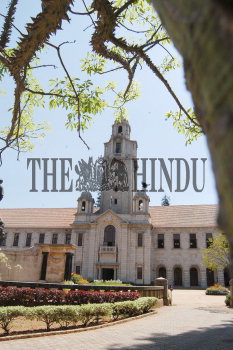 Caption : BANGALORE, KARNATAKA, 28/02/2005: A view of the Indian Institute of Science (IISc) in Bangalore. The Harvard-educated Union Finance Minister Mr. P. Chidambaram during his budget speech had announced that a grant of Rs.100 crores will be given to the Institute to make it a world class educational institution on the lines of Harvard and Oxford. Photo: G.R.N. Somashekar