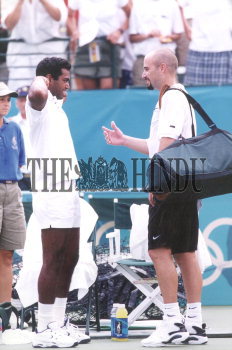 Caption : Andre Agassi of United States (right) having a word with Indian tennis player Leander Paes after the men's singles semifinal match at the Atlanta Olympics on August 1, 1996. Andre Agassi beat Leander Paes in straight sets with the scores at 7-6, 6-3. Photo: Vino John