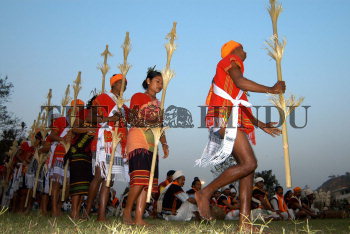 Caption : TIWA tribal boys and girls perform traditional TIWA bamboo dance during the TIWA Cultural Festival at Shankardev Kalakshatra in Guwahati on February 24, 2005. TIWA is one of the major tribal group of Assam, which has been demanding for the six schedule status from the Assam Government. Photo: Ritu Raj Konwar