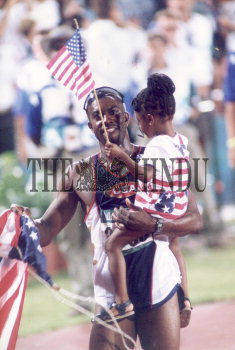 Caption : Allen Johnson of United States celebrates with his daughter Christine after winning the gold medal in the men's 110 metres hurdles event with a new Olympic Record in the Atlanta Olympics on July 30, 1996. Photo: Vino John