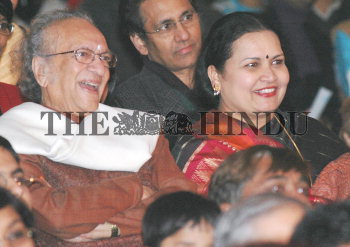 Caption : Sitar Maestro Pt. Ravi Shankar with his wife Sukanya Shankar enjoying "Music in the Park" a Grand Musical Night at Nehru Park in New Delhi on February 20, 2005. Energetic Western music came with an Indian grace as sitar maestro Pandit Ravi Shankar's daughter Anoushka Shankar shared the stage with six of her father's disciples at a performance at Nehru Park. Returning to the stage after a break of almost a year, Anoushka, along with the band Jazzmin, presented a number of instrumental compositions by her father in the performance named "Music in the Park". Pandit Ravi Shankar himself was instrumental in forming the band Jazzmin a year ago. Photo: Anu Pushkarna