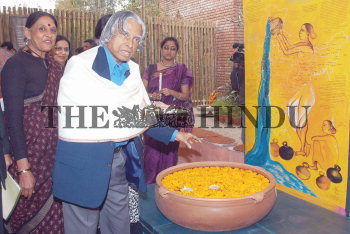 Caption : President A. P. J. Abdul Kalam inaugurating "The Indian Crafts Journey", a multimedia exhibit of artistic maps, crafts and textile watched by Jaya Jaitley at Dilli Haat in New Delhi on February 17, 2005. The exhibition is being organised by Dastkari Haat Samiti, an organisation of Indian artisans headed by Samata Party leader Jaya Jaitley. The exhibits are a series of 24 maps which document the cultural heritage, crafts and lifestyles of different states. They are works of art in their own right, having being painted by renowned artists. The exhibition has a background musical score comprising the rhythm produced by the handloom, hand beating of metal, tapping of a stone carver, among others, recorded and interspersed with music from other handmade instruments like flute and ghatam. Photo: Shanker Chakravarty