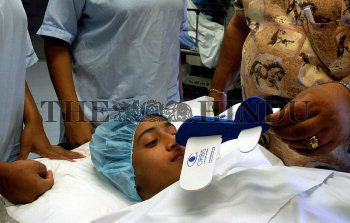 Caption : A young boy gets a check-up before heading for the operation theatre on board the DC-10 aircraft of ORBIS flying eye hospital, in Kolkata on February 17, 2005. The ORBIS began its programme in 1982 and has travelled to 72 countries and provided eye care to millions of people. This unique hospital has visited Kolkata after 10 years and the next stop will be New Delhi. Apart from treating and operating upon visually challenged children and adults, these experts also provide hands-on training to doctors and eye bank technicians from West Bengal and the seven North-Eastern states and Nepal during the three weeks stay in Kolkata. The DC-10 aircraft which has been converted into a full-fledged hospital and training facility, has five ophthalmologists and an orthoptist. The host of hospitals from which trainees are participating in the various programmes on board are the Regional Institute of Ophthalmology, Disha Eye Hospital, Rotary Narayan Sankara Nethralaya and Susrut Eye Foundation and Research Centre. 37 million of the world's population are blind and another 124 million have low vision and are at risk of becoming blind. 75% of them don't have to be. Millions can be cured with low-cost techniques routinely practised in many countries. ORBIS has trained more than 72,000 ophthalmologists, nurses, biomedical engineers, and other healthcare workers. They, in turn, have provided treatment and training to hundreds of thousands of people in their home countries. ORBIS has global sponsors like Alcon (Alcon, Inc. is the world’s leading eye care company) and FedEx , apart from other sponsors like Honeywell, United Airlines, Standard Chartered and Ronald McDonald House Charities and many others. Photo: Parth Sanyal