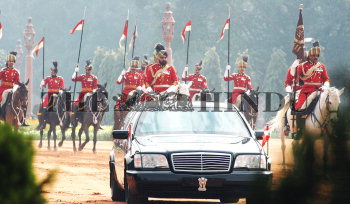 Caption : The Austrian President Heinz Fischer and his wife Margit Fischer seated inside the car are being ESCORTed by the Presidential guards during the ceremonial reception at the Rashtrapati Bhavan in New Delhi on February 17, 2005. Mr. Fischer is on a six day visit to India. Photo: Rajeev Bhatt