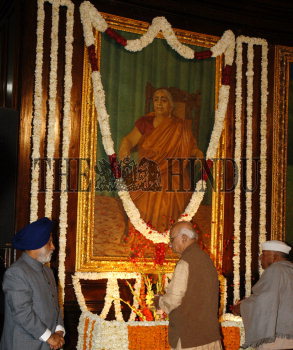 Caption : Deputy Speaker Charanjit Singh Atwal, Leader of the Opposition L.K. Advani and R.C. Vikal, at the unveiling of a portrait of Sarojini Naidu, the Nightingale of India, on her 126th birth anniversary, at the Central Hall of Parliament House in New Delhi on February 13, 2005. A book on Sarojini Naidu was released on the occasion. Photo: V.V. Krishnan