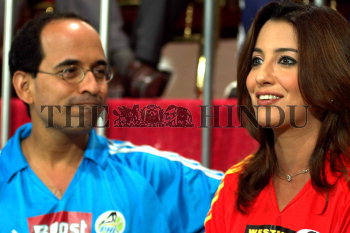 Caption : Well-known cricket commentator HARSHA Bhogle and Bollywood star Perizad Zorabian caught in different moods during the match between Sher-e-Jalandhar and Chennai Veerans in the Premier Hockey League at the Gachibowli Complex in Hyderabad on February 11, 2005. Photo: Mohammed Yousuf