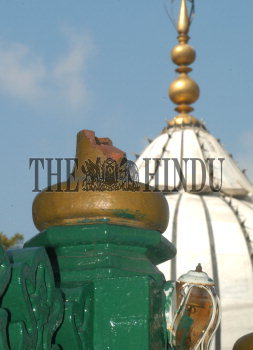 Caption : One of the damaged portions of tomb of Amir Khusro, Delhi's foremost poet, which was damaged by a man from West Bengal during morning prayer meeting at the Nizamuddin dargah in South Delhi on February 08, 2005. He singlehandedly broke the intricately carved marble "jaalis" adorning the poet's grave and vandalised more than three finials. Amir Khusro, Nizammudin Auliya's most faithful disciple who has come to symbolise India's plural heritage, chose to be buried in the same complex as the saint. Photo: Shanker Chakravarty