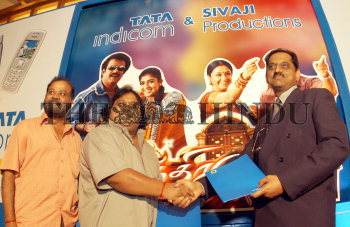 Caption : TATA Indicom in a first of its kind tie-up with Rajnikant film, "Chandramukhi". Madhusudan, Chief Operating Officer, Tata Teleservices - Tamil Nadu and Kerala Circles (ext.right) shaking hands with Ramkumar, the producer of the film at a function in Chennai on February 07, 2005, watched by the director P. VASU (ext. left). Tata has planned to install giant size cutouts of the superstar all over the State as a run-up for the release. Promos of the film and ring tones of the songs will be made available on Tata Indicom phones. Photo: N. Balaji