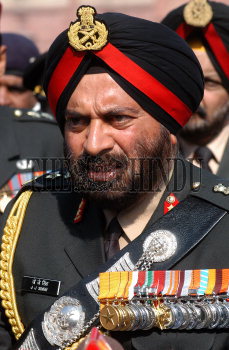 Caption : New chief of the Army Staff, General Joginder Jaswant Singh, the first Sikh to become the army chief, addressing the media after inspecting the guard of honour at the army headquarters, South Block in New Delhi on February 01, 2005. A highly-decorated Maratha Light officer, Gen. J.J. Singh is the 22nd army chief. Having experiences of a variety of first-hand combats in his over 12 years of field duty, Gen. Singh has the distinction of being decorated with Param Vishisht Seva Medal, Ati Vishisht Seva Medal and Vishisht Seva Medal. He has also held senior staff appointments like serving as Additional Director General in the military operations during the Kargil conflict, Commander-in-Chief of Army Training Command and Commander-in-Chief of the Western Army Command. Photo: Shanker Chakravarty