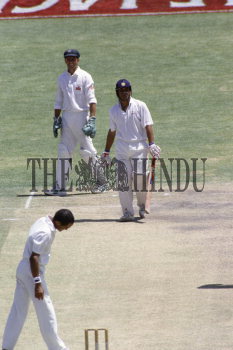 Caption : Sachin Tendulkar of India watches the ball after playing a shot off the bowling of Omar Henry as wicketkeeper Dave Richardson looks on during the fourth and final cricket Test match between India and South Africa at Cape Town in South Africa on January 5, 1993. Photo: V.V. Krishnan